I don’t know about you, but I’m freezing my ass off. This is problematic as it is only the first week of December. For those playing our home game you will not be surprised to learn that winter has not technically started and will not for a few more weeks. I grew up on the cold, salt-covered streets of Omaha, Nebraska. I should be used to the cold. Sadly, after spending a few years in Nashville, Tennessee, and growing accustom to it’s “winters,” any hint of cold whatsoever turns me into a shivering mess. But we must go on. Let’s crank the heat, put on a ski-mask and get to this.

Alan Partrige has had quite the career. From buffoonish television reporter to buffoonish host of a chat-show to ultimately buffoonish light-rock radio DJ, he appears to have miraculously held down steady work for over a decade despite being utterly horrible at his job. Perhaps it says more of Radio Norwich, the low-wattage, suburban London radio station he has been a part of for the past decade (starting with the graveyard shift, then getting promoted to the slot before midnight, and now with a mid-morning show on their digital tier). Mid-Morning Matters is presented as a video stream set-up on the stations (fictional) website. We look through one of two in-studio web-cams as Alan hosts his show. Each 10-minute episode begins with a benign listener topic (favorite condiments, a personal favorite), and eventually devolves into some form of Alan-centric melt-down. It is one of my absolutely favorite TV-characters and I’m glad he’s back, even if its only in a digital form. 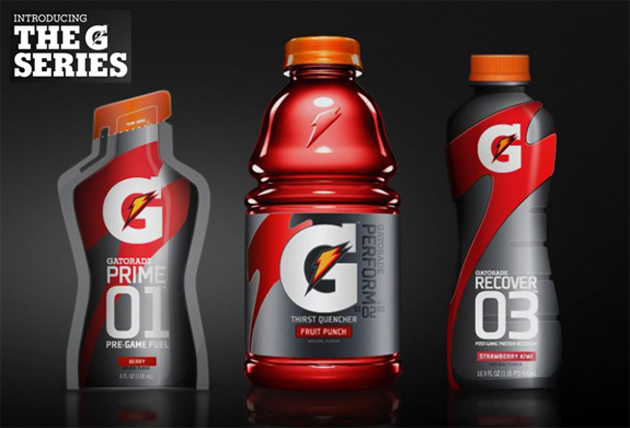 I should preface this by saying that I’ve never actually tried the Gatorade “G” Series. I am not one who is inclined to work out. On occasion I will take my dog to the park for a walk, but in most cases those events end with me maybe enjoying a nice cup of tea. My electrolytes are fine. Of course, not having tried this line of beverages is no reason to withhold a recommendation. Not since salt-tequila-lemon has beverage consumption needed formal instructions. Let’s give it up to our friends over at Gatorade for having the courage to say drinking an artificial liquid from a plastic bottle is not enough — one must drink three artificial liquids from three separate containers. This is advanced thinking, and it breaks down thusly:

-FIRST STEP! Gatorade Prime 01. The zero-one let’s you know that this is the first beverage you should consume. It is served in a pouch, not a bottle. It is like a Capri-Sun for dudes who talk about the intensity of their burn.

-STEP TWO! Regular Old Gatorade Bor-ring! Nothing new to see here. Just the same old slightly-salty Kool-Aid you have grown to know and tolerate as a replacement for good-tasting drinks.

-AND THREE! Gatorade Recovery 03. Hey, the numbers are back! We no longer must wander the desert aimlessly wondering what drink must finally be ingested. (But more importantly…) We’re done! We’ve reached the end. The three sweet elixirs swirl in our bellies, reacting with the acid and bile to form a potion that will bring us eternal life, eternal love, happiness and my god look at those abs!

As you get ready to face the week ahead just remember: of all of the three-part beverage systems currently on the market, the Gatorade “G” Series is definitely one of them. Drink up, so long as it is in the correct order.

Codes are everywhere, and thanks to popular works from literary titans Dan Brown and Steig Larson (a man whose very name is an anagram for “Realest Sign”) codes are more popular now than ever. And it’s not just the simple ones where A=1 and Z=26.

Let’s say you’re doing the Sunday crossword and your notice that four of the answers represent names of recent English Prime Ministers. And then in the same paper you notice the second word in all of the headlines on page A-2 begin with the letter T. From this we are able to establish our key:

And what about the pattern on the wall? The squares, they go: blue, black, tan, tan, black, tan, blue, blue, tan, black, tan. But the squares are simply a diversion. They want us to focus on the color, but we should really be focusing on the sides: 4. Each square has four sides. 4=D Coincidence? Not if it’s a clue!

When you get home from work you dart to the study. There are codes everywhere. That receipt from the dry-cleaner says order number 1492. Could that mean NIB? Maybe ADIB. But what do those mean? Perhaps they are also codes. Codes within other codes! Isn’t this fun?