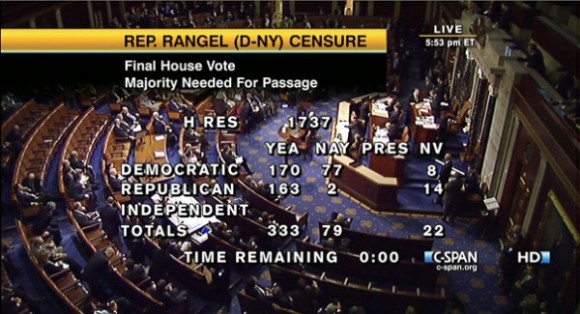 The House voted last week to censure Representative Charles Rangel, a rebuke that carries no real consequences. Many Americans have been wondering what the difference is between censure and reprimand, another variety of punishment the Ethics Committee considered. In fact, these are but two of many possibilities in the confusing and arcane system of Congressional smackdowns. Below, a brief explanatory guide, from least to most serious.

Reprimand
This most common of punishments, which carries no actual consequences, calls for House Ethics Committee members to take “a few days” to read aloud the representative’s infractions and “really lay into him.” It was implemented in 1842 to combat widespread perceptions of Congress as a bastion of inefficiency and grandstanding.

Banishment
Relieved of lawmaking duties over a long weekend, the representative is instructed to check into the Alexandria Radisson. If the representative asks for a king-size bed, the front desk clerk, who has been briefed in advance, offers his apologies that none are available, even though there are quite a few available.

Sweetbread Surprise
In this particularly devious punishment, the offending representative is invited to a party with all his friends. However, the representative is told that his best friend cannot make it. Champagne and sweetbreads are served. After a time, the party guests to begin to gossip and spread terrible rumors about the absent friend, at which point the representative joins in, at first reluctantly and then with considerable jollity. Just then the guests explain, to the representative’s horror, that the best friend has been there all along, and wheel out the corpse as a big band plays “I Got Rhythm.”

Talking-To
Often confused with Disappointment, this punishment dictates that the representative must be referred to as “Mister,” or, in the case of a female representative, “Young Lady.” Alternatively, the Ethics Committee members may elect to refer to the representative by his or her full name for the duration of the proceedings. If a representative lacks a middle name, or cannot afford one, one will be provided at government expense, though naturally it will not be a distinguished, euphonious middle name like Winston but something like Gippman or, in extreme cases, Ralph.

Expulsion
Frequently and erroneously considered the most severe punishment meted out by the House, this action requires a two-thirds vote. Permanently relieved of lawmaking duties, the representative is taken out onto the Capitol steps, blindfolded and given a satchel containing nothing but a copy of the Financial Times and a wrapped loaf of ciabatta. He is told to walk six thousand paces before removing the blindfold. When he removes it, he sees that he is not in downtown Washington, D.C., but deep in a densely wooded area, and that the bread is not ciabatta, but in fact olive loaf.

A Spanking
This humiliating, though rarely employed, punishment must take place in a public park during the lunch hour. The House speaker brings the paddle. It does not matter who brings the haddock.