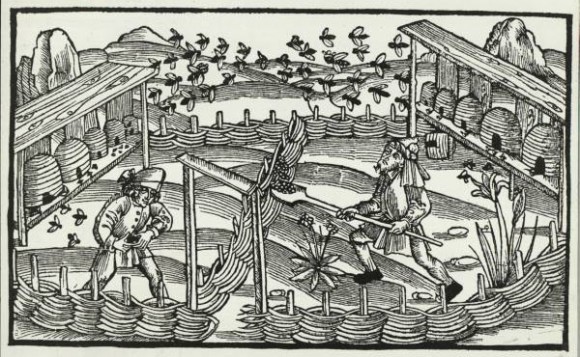 Bee Swarms Are a Natural Phenomenon
Certain species of bee do their pollinating in swarms. It’s just a fact of nature. This swarm happens to be a little closer to my window than I’d like it to be, but that doesn’t make it an abnormal event. It’s not like it’s some manifestation of evil waiting to devour the first person who betrays the slightest weakness. Like opening a window only to have them wrap around your neck like a tentacle and drag you into some bee-populated inferno. That’s not what’s happening here at all.

You Never Hear About Bee-Related Deaths
I think that if people were being stung to death in their homes, it would be a pretty big story. I would have read about it in the Daily News and spent the rest of the day sealing up my windows with that oversized saran wrap you get at Home Depot. On the other hand, it might be that bee deaths are so common they’re not even worth reporting. Maybe this same swarm kills two or three people every week and the media is just so tired of the story that they don’t even pay attention anymore. The police keep trying to do something about it but it’s not like you can arrest bees, and in the end it’s easier to keep it quiet because hey, they’ve got a lot on their plate.

The Bees Have No Reason to Come Inside
I am not hoarding pollen. I’d like to stress that point, in case the bees are listening. They don’t have anything to gain by entering my living room by force, swarming around me in an enclosing, vaguely sexual mass and leaving me curled in anaphylactic shock over my coffee table. I will give them anything I have—my VCR! my collection of ThunderCats figurines!—if they only leave me in peace. But by the same token, the bees had no reason to come to the city in the first place. They were driven here by a force that modern science cannot explain. My ThunderCats will do nothing to appease them.

I Had a Dream About Bees Last Night
Total coincidence. I was meeting Sheila in the middle of a desert, and when I told her I loved her she started to shake and her tongue turned into a thousand bees just streaming out of her mouth. I tried to run but I couldn’t because of the sand and I woke up right before her tongue-bees put their venom inside me. I know it’s weird. I don’t think it means anything. Look, I don’t know why we’re even talking about it.

I’m at Peace with Myself as a Person
I’ve led a rich, full life. If it turns out that I’m killed by a swarm of bees, wearing my pajamas at four o’clock on a Sunday, I’m okay with that. There’s a dignity in accepting your fate—in my case, accepting that in a few minutes I’m going to be stung to death by bees.

Except I’m Not Going to Be Stung to Death by Bees
Sorry, that last one got away from me.