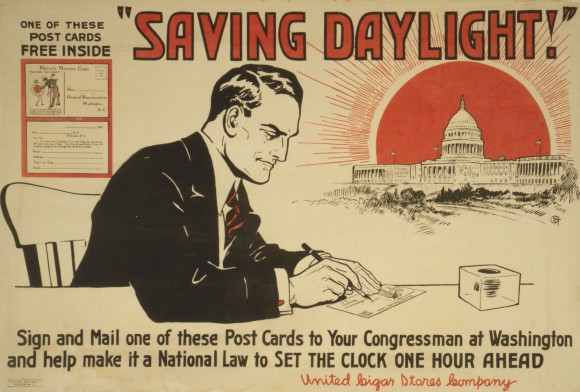 In 1895, New Zealand entomologist George Vernon Hudson introduced the idea of Daylight Savings Time to promote longer enjoyment of daylight hours. While DST has been controversial, some believe it has not gone far enough to address the many temporal issues in our day-to-day life. We’ve uncovered these additional proposed measures aimed at correcting such time shortfalls.

Daylight Squandering Time
Daylight hours between eleven a.m. and five p.m. on Sundays shall be earmarked for the watching of Law & Order re-runs, Storage Wars marathons, TNT broadcasts of Predator (or other early works in the Schwarzenegger oeuvre), or sundry “low mental impact” entertainments. Anyone to exclaim, “You’re just gonna sit on the couch all day? It’s beautiful out!” shall receive non-verbal grunting, and be exiled to enjoy the weather alone, sans sunscreen.

Nightlight Saving Time
If one spouse should go to bed before the other, a nightlight shall be deployed as a reasonable compromise between the darkness preferred for sleep and the illumination needed to avoid catastrophic shin injuries when the latter partner has to stumble in over all those shoes. In return, the night owl cedes the right to be cranky in the morning, especially since he was probably just staying up to surreptitiously watch a re-run of HBO’s Real Sex.

DMV Saving Time
During one month of the year, Department of Motor Vehicle offices, banks, doctors, post offices and like vital services shall be compelled to stay open during hours that allow actual working people to avail themselves of said services. This shall be achieved by sneaking in each night in the preceding weeks and setting all of the clocks back a scant five minutes, so as not to arouse suspicion. If, during said nightly office break-ins, one was to place a spoiled ham in the desk of that DMV lady who always gives you the stink eye, we promise not to say anything.

Aging Party Host Saving Time
Guests shall show up at the exact listed start time. We aren’t goddamn twenty anymore. The later you come, the later we get to bed, and that affects our Daylight Squandering Time.

Time Travel Saving Time
Should time travel be invented, the government shall take responsibility for all Hitler-killing initiatives, whether by sniper rifle, preventing his parents from coupling via quantum clock-block technologies, or simply publishing cruel reviews of his paintings in his art school newspaper until he commits suicide. The Hitler-killing onus thus placed elsewhere, civillian time travelers are at liberty to focus on their own personal happiness (i.e., stealing future lottery numbers).

Saving Time from Time Travel
When the world economy collapses from widespread inflation caused by time travel lottery abuse, stock market speculation, and compound interest exploitation (depositing a penny in a bank hundreds of years in the past, then zipping to the future to reap the gains), the government shall be allowed to step in and take your time machine, admonishing, “See–this is why we can’t have nice things.”

Internet Comment Time Reimbursement
All time spent reading Internet comments (to pick an example completely at random: an angry reader complaining about a humor essay) should be deemed “wasted” time, and shall be returned to the reader at the end of life. No time shall be reimbursed to the writer of said internet comments, as they clearly have a surplus of it.