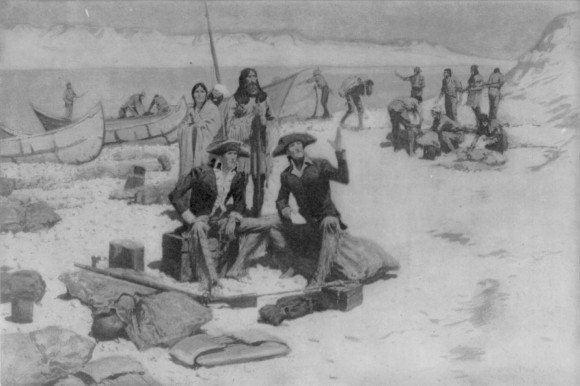 [Lewis and Clark, mid-conversation, are exploring southeast coast of Louisiana.] *

Clark: And they will simply reveal them upon request.

Lewis: I understand that part of it, but what incentive do these women have?

Clark: They desire the beads that will be given to them.

Lewis: Let me get this straight. When given these beads, the women will remove the top half of their wardrobe and then once again robe themselves?

Clark: I suppose they will shake them around a bit first. Perhaps let out a playful scream of sorts.

Lewis: And these beads, they are worth a great deal of money?

Clark: No, no, not at all. They are simply a token. When handed the beads, or I suppose the beads could be thrown down to them from above, the women will understand that this is the first half of a transaction.

Lewis: And the transaction is completed by them revealing their breasts, and like you said, shouting or shaking them around a bit?

Clark: Exactly. One would toss the beads and demand, “Show me your tits”, thus initiating the transaction.

Lewis: It’s certainly a fascinating idea, I’ll give you that. And this will occur all of the time in this city?

Clark: Perhaps one week would be set aside specifically for this, but yes, I envision a city where this is constantly taking place.

Lewis: And remind me again why the women will do this?

Clark: I haven’t a clue, Lewis. Perhaps issues with their father.

Lewis: Yes, it would have to be. [Pause] And there will be alcohol involved?

Lewis: This will be quite a place.

* NOTE: When this piece was written, the author was unaware that Lewis and Clark never actually explored Louisiana during their expedition. He is still confused about what an “explorer” actually does.