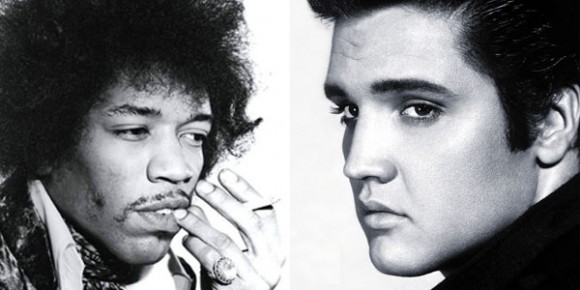 Hendrix: I noticed a lot of your music is pretty lame.

Elvis: You had to be there. It was a different time.

Hendrix: I kind of was there.

Elvis: Like right when I started, I mean. All the music was really bland and then I did rock and roll and everything was different.

Elvis: No, there weren’t electric guitars, but it was still pretty crazy. I would move my hips from side to side and then young girls would kill themselves as a result.

Hendrix: Did you ever put LSD in your headband so that when you sweat on stage, it would seep into your brain?

Elvis: No, I’m definitely into drugs, in a big way. I took all of them. But even drug people don’t do that crazy headband shit you’re talking about. It just doesn’t make sense. Why not just take the LSD before going on stage?

Hendrix: So how did you make the people go crazy? Just by setting your guitar on fire and stuff?

Elvis: Wait, what the fuck? Why would I set my guitar on fire?

Hendrix: You know, get the crowd into it.

Elvis: I told you, I would shake my hips and they would go fucking insane.

Hendrix: So you never did any crazy stuff?

Elvis: No, not really.

Elvis: Oh, I guess there was one time I went to the Oval Office stoned out of my fucking mind carrying a loaded Colt 45.

Elvis: What do you mean?

Hendrix: You were the movie Flaming Star, right?

one for the money, two for the show, three to get ready
Written by: Matt Passet
Tweet