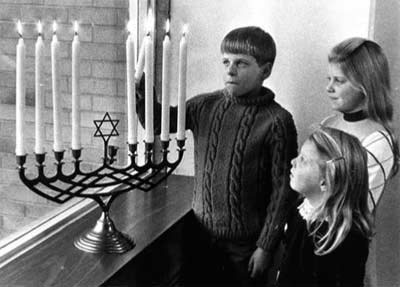 A middle-aged Jewish couple sit (in a cave?). In the background, the sound of spinning dreidels can be heard. The man, David, is hunched over an oil lamp. His wife, Muriel, walks over.

David: Would you kids please cut it out with those damn dreidels already? With the spinning and the gimel and the this and the that, I can barely hear myself think.

David: (sarcastically) You want that I should just run to the store and buy some more? Come on, Muriel, someone, maybe Pharaoh, is out there, and is after us for one reason or another.

Muriel: Well I just don’t know how long that oil is going to last.

Muriel: Is that the same oil from yesterday?

David: (sarcastically) No, I went to the store and bought some more early this morning, while you and the kids were asleep. Just crept out nice and early and got some more. And it was on sale, too!

Muriel: Really? Sarcasm—this early in the morning? You want that we should just start every day with such anger?

Muriel: Wow, the oil has lasted three days. This is a miracle.

David: (biting into a piece of matzoh) No, it’s good, but not quite a miracle.

Muriel: When will it be a miracle?

David: Strange, yes. But not yet a miracle.

Muriel: That is some oil.

David: Yes. Thank God that this oil has lasted so long. I have a feeling it will soon be a miracle.

Muriel: How many days has it been now?

Muriel: Which means…it is Hanukkah!

[David places a piece of gefilte fish on his plate.]

Muriel: Do you want the white horseradish or the red?

David: Which do I always use? Every single time I eat gefilte fish we have to go through this song and dance.

David: Then why do you have to ask me every time?

[The kids run over.]

David: Kids, gather around. Open your presents. This oil will not last forever.

[They open their presents.]

The next day, the oil ran out, and the entire family perished.