A Few Problems I Have with My Roommate, Who Happens to be a Penguin 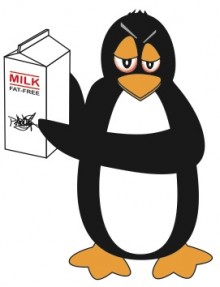 1. He writes his name on his food in the fridge. This started recently, and he has no thumbs, so it ends up being a garbled mess. It’s not that he should be able to write better—most penguins don’t even attempt to write, and the ambition is something I respect. However, it is unnecessary. We don’t buy the same foods. No need for the power play.

2. Speaking of the fridge area: When I buy eggs, I just have to assume I’m going to lose at least three when he tries to incubate them. I understand the confusion once. However, this is a consistent problem, and in nature, penguin eggs are not found with 11 other eggs in a cardboard carton. It is very reasonable that he be asked to figure this out.

3. He is always playing up the fact that he is a penguin, and therefore, his life is harder than mine. What bothers me most about his moping is that it’s always so well timed to coincide with whenever a chore needs doing. Example:

Me: Hey, penguin, I think it’s your turn to clean the bathroom.
Penguin: (Gives me a look that clearly alludes to his abbreviated 15-20 year life span.)
Me: Ugh. Fine. I’ll do it. 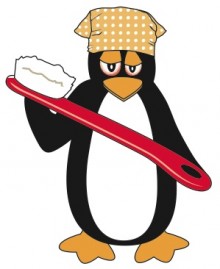 4. He is always bitching about serial monogamy, how he only gets one lady a year. Hey buddy, want to try lifelong monogamy? Yeah, I didn’t think so. All of a sudden, fresh tail once a year sounds pretty glamorous, doesn’t it?

5. Smoking weed with his buddies when I’m gone. I just don’t like drugs. It’s risking eviction, and whether you believe it’s a gateway or not, it can’t be healthy for him. Still, he’s always surprised when he’s out of breath at the top of the stairs. I think this one pretty much speaks for itself.

6. He never pays the rent on time. I told him when we signed/wing-printed the lease, that I don’t know where he gets $700 a month from, and I don’t care, as long as the check is on time and doesn’t smell like fish. That rarely happens the way I would like. 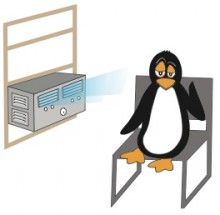 7. The sky-high air conditioning bills year round, and his insistence that we split it down the middle. Like there’s any chance I’m the one cranking the AC in January. Please. He moved to new york with a damn good idea of what the climate would be. It’s time for him to take some responsibility for his own choices. He’s like 40 in penguin years. Grow up.

8. Come to think of it, everything in the apartment has to be adjusted for him, and he has no sympathy for how this makes things difficult on me. Our couch is two feet from the TV. I have a headache after watching for 10 minutes, but no, we can’t move it back. Why? Because apparently all penguins are nearsighted. And I know at least one penguin who is too stubborn to buy glasses.

We come from different backgrounds. My parents are divorced. He doesn’t know what that’s like. Four generations in a row of his family have been eaten by seals. God willing, I’ll never have to deal with that. I just wish he would work a little harder to meet me in the middle.