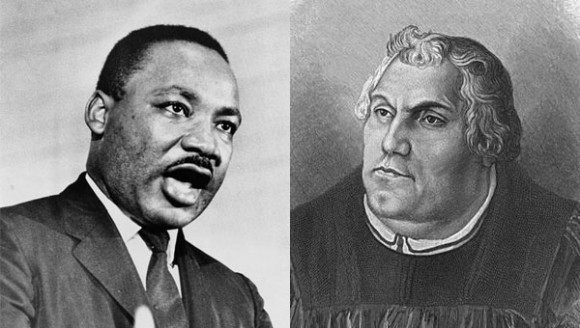 ML: The one and only… sort of.

ML: Also the Lutheran religion was likely named after me. You know, because the Luther part.

MLK: I like that in 1517, you nailed a list of things to a church door and then things changed.

ML: In that ballpark, definitely.

MLK: Yes, it was a list of theses, which is a word that probably means complaints.

ML: And you, my son (but not really my son because I think I’m white and you’re definitely black), carried on my message of questioning authority by marching with people when they didn’t want you to march, and then boycotting a bus company, and of course the speech about having a dream.

MLK: That’s pretty much what I did.

ML: “I have a dream that my four little children will one day live in a nation where they will not be judged by the color of their skin but by the content of their character.” And so on and so forth. I could go on and on, but you know it.

MLK: Jesse Jackson and John Lewis are two people that I knew who are still doing things today.

ML: I am German and was alive in 1500s. If one had to guess someone I knew, they would probably guess Mozart, and most likely be wrong. Maybe very wrong.