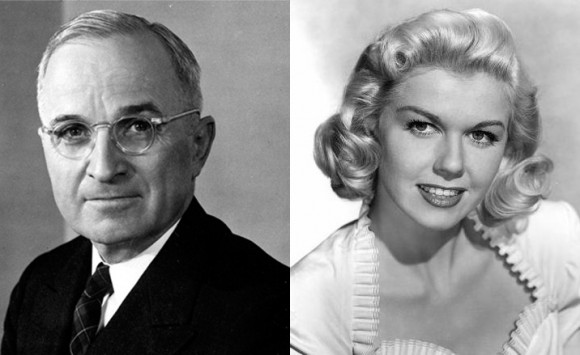 Truman: I get why he listed me first. I mean, I was a pretty important president, dropped the atomic bomb on Japan and everything.

Day: Yeah, but why am I second? I was what, a singer and actor, I think. I couldn’t have been one of the most important people in the late ’40s.

Truman: You might have had a talk show or something, no? I might be thinking of Dinah Shore.

Day: What do you think about having a reunion?

Truman: Getting the whole team back together?

Day: Yeah, the whole gang. Me, you, get a rep from Red China, whoever Johnnie Ray is, an actor from the original Broadway cast of South Pacific, Walter Winchell, Joe DiMaggio, everyone.

Truman: Should we invite those mentioned in the other verses?

Truman: I think the North and South Korea part might be an issue, but yes, definitely the rest of them.

Day: We could even include that Jewish couple, the Rosenbergs, and maybe have an H-Bomb there, and the band Sugar Ray or just Mark McGrath even, and we could get some of whatever the fuck Panmunjom is, invite Brando, maybe someone does a quick number from The King and I, and then a reading from Catcher in the Rye.

Truman: I’m not sure about having an H-Bomb there. People probably wouldn’t be too psyched to see me around an H-Bomb. Clearly I’m not afraid to use shit like that.

Day: So no H-Bomb then, but we should definitely invite Eisenhower, who could maybe bring a vaccine with him, and then apparently England has a new queen so she should be there, and of course Rocky Marciano and Liberace have to be there, and I guess we see if this Santayana guy will show up. Then that’s it. Goodbye. Party over.

Truman: I say we do it. But I have one rule.

Day: I think I know what it is…

Day: [Interrupting] No fires! I knew it. I knew you’d say that. You always have that rule.

Truman: You know me so well, Doris.

Day: And you know me so well, Mr. President.

[Doris Day lightly taps her finger on the tip of President Truman’s nose. He playfully pretends like he’s going to bite her finger. Later that night, they make love, and it is passionate, scandalous, and filthy.]

JFK, Blown away, What else do I have to say
Written by: Matt Passet
Tweet