COACH: Sarge, you are the best fighter available. Don’t let me down!

SARGE: Silence! I am FANTASTIC, Coach!!

SARGE exits the scene looking like the coolest boxer yet.

SCENE 2 – in the boxing ring

The fight begins and sarge touches gloves with the other boxer (Kid “The King” Kruel) in the ring. Then the announcer says “LETS GET READY TO RUMBLE” and the bell rings.

SARGE: HEY OTHER BOXER! GUESS WHAT THIS IS? (holds up a voluminous fist)

KRUEL: Is it your fist?

SARGE: NO, it’s FULL OF SPIDERS! (opens his fist and spiders crawl out all over sarges body)

SARGE: Now you know what it’s time for. Joe, cue the music. (Music plays, the Rocky theme, and Kruel knows that he’s in for a beating.)

SARGE: That’s not all you slimy puke. Jim, play your CD. (Another song starts to play over the first song, and it is none but the ROCKY theme song again!!!)

SARGE: alright enough trouble out of you Kruel, time to meet your doom goddammit. But I have one more surprise for you. (at this point Sarge’s face transforms into Rocky’s face and he says “yo adrian” and punches Kruel’s head clean off in a single punch).

KRUEL: NooooooooooOOOOoooo (his head flies into the wastepaper basket and some adolescent doofus urinates on his wasted corpse.)

ATTRACTIVE WOMEN: (Crowd around Sarge) Sarge you are so handsome!

SARGE: Thanks girls. I’LL KILL ANYONE!

Scene 3 – Sexual Scene . Now sarge is lying in a huge bed with 146 different women, all of whom are HOT

SARGE: This is cool.

WOMAN 13: Sarge will you marry me

WOMAN 5: Sarge will you marry me

WOMAN 56: Sarge will you marry me

WOMAN 86: Sarge will you marry me

WOMAN 140: Sarge will you marry me

WOMAN 91: Sarge will you marry me

SARGE: I can’t marry any of you! I am a fighter not a lover, now prepare to DIE!

WOMANS (ALL): Wait, sarge… you mean to tell us that you lured us into your apartment so that you could defeat us in battle, reigning surpreme?!?!

SARGE: DAMN RIGHT (Sarge punches the head off of woman 1, and it flies back and hit woman 2’s head, knocking it also off. This knocks the shit off of woman 3’s head, and by the end of it all 146 womens heads are in the trash can and sarge is vomiting on them because he is that cool.) I ought to be on a baseball card!

POLICE: Sarge, it’s us the police, open up.

SARGE: What do you want civilian troops of WEAKNESS? Your heads punched off?

POLICE: No sarge. We have a new target for you. A man is really evil and has killed off 146 hookers in the last hour.

SARGE: LET ME AT HIM

POLICE: But his name is… YOU

SARGE: OK (Sarge punches his own head off and it flies into the STRATOSPHERE)

SCENE 3 – Final Scene. Ten years later, A mother is pushing her newborn baby down the sidewalk in a stroller.

NEWBORN: Mom, what is that thing up there in the sky?

MOTHER: That… is the handsomest head I have ever seen flying around in the sky.

NEWBORN: Oh weird. It is flying towards us!

MOTHER: Crap! Crap! (The head lands in the baby stroller and starts to eat the baby)

NEWBORN: AHHH THIS AWESOME DUDE IS EATING MY LIVER (Then sarge finishes eating the baby and then grows into a fully grown, awesome, naked, beautiful man).

MOTHER: WHAT? (Stunned by sarge’s bodacious bod) Who… who are you?

SARGE: (this is the coolest line in the whole movie) The name’s sarge. Actually… it’s Rambo.

Here is thy movie poster: 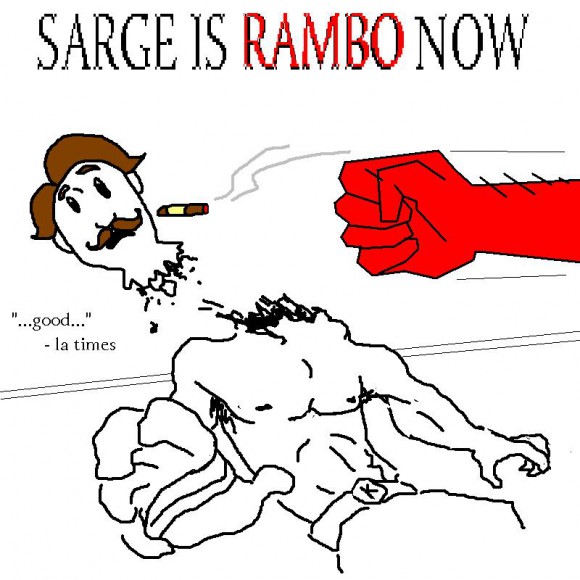