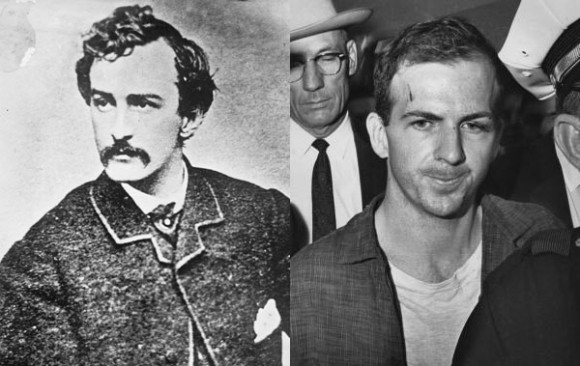 Oswald: Only way to do it, am I right?

Oswald: Aside from the three name thing, another thing we have in common is that we both killed beloved presidents.

Booth: True that. I did it because I was a fan of the south team and Lincoln was the head of the north team.

Oswald: I’m not sure why I shot Kennedy, actually. I think maybe the CIA had me do it or maybe Lyndon Johnson or the Communists. Whatever. The whole thing is sort of a mystery.

Booth: You should have waited until he was seeing a show or something and then snuck up behind him.

Oswald: Times were different when you did your assassinating. Nowadays, you can’t just walk up to a president with a gun.

Booth: My plan was flawed anyway. I was killed a few days afterwards.

Oswald: I was killed like immediately, but not by the police. That’s the weird thing. I was shot by some guy named Jack Ruby. Not sure why he even killed me. The whole thing is sort of unclear. When he shot me, I remember my face was like, “Ow! What?!? Who is THIS guy!? What the?!” Crazy day.

Oswald: If we were alive today, we would probably be pretty active in the Tea Party movement.

Booth: I would almost definitely be on Fox and Friends.