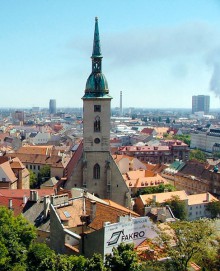 It’s always possible that the name is in the Slovak language, which I imagine smooshes words together, much like the Slovaks themselves smoosh every part of the pig into the blood sausage delicacy jaternice. In that case, the capital would be Slovakiacity, which is a great name because it fits perfectly in the tourism ad campaign I just came up with: “Slovakia — Feel the Slovakiocity!” Doesn’t it make you want to buy a ticket to Slovakiacity right now?

Next: Whim editor Brock Mahan proposes an alternate theory on what the capital of Slovakia is.