Sarge realizes you like “Jurassic Park”. But he also found out that Jurassic Park is IMPOSSIBLE, and it can never happen because the sciencestist doesnt have enough DNA data! So, Sarge has come up with a new screenplay that is like JP except for the 21st century with facts! Dinosaurs are bullshit!!

The screen play is as follows:

Two unaccustomed victims, Clareyence (a girl) and Tomnald B. are visiting the new park with their dad.

CLARYENECE: Dad, I dont want to go to this park it seems scary.

DAD: I don’t give a damn, you kids better enjoy this park because it cost me 35 bucks to get in!!!

Just then, the trees move to the sides and reveal the logo of the park:

A scary sounding music is heard.

DAD: Okay now according to this map we should be able to see some jurassic bears right over…

TOMNALD B: DAD the electric fence is out of batteries! Some one forgot to put in a fresh set of BATTERIES!!!!

Then a bear comes, its like a huge brown bear and it goes RAOAR and eats the dad in half.

The kids run the fuck away from this grim party of peril and hide behind a tree.

The kids are running out of food and shelter and are hearing thumps from a REALLY bigass bear in the distance.

Kids: OHLY FUCK THATS A BIG BEAR (they said it together and the cameraman starts laughing)

Just then a bear with a really long neck in the distance howls because hes been eaten by the coolest bear ever.

Kids: oh man we gotta get out of this Jurassic Bears (I think I get 5 cents any time someone in the movie says it)

Just then a bear with a Raptor head pops out, as if to say “where do you think YOURE going!”

Kids: We should have taken a trip to Walt Disney Land or something!! *wait for the audence to stop laughing*

Just then 2 half dinosaur half bear hybrids pop out and maul the kids, turning their asses into grimy ass hamburger meat. dead. 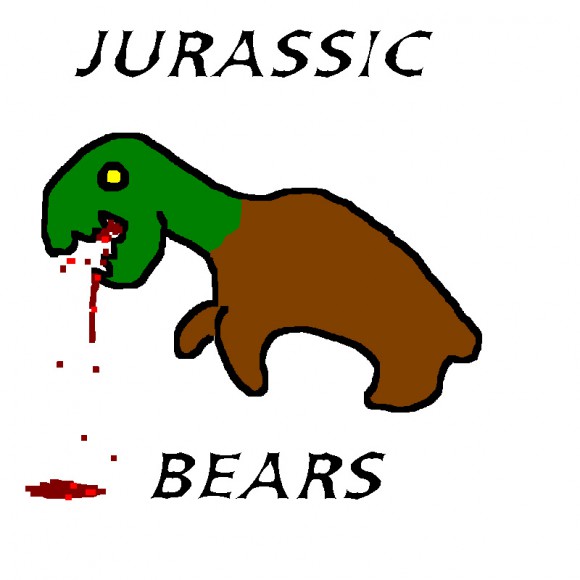