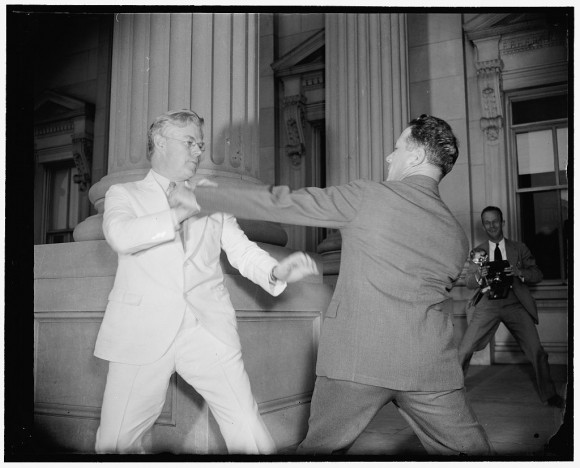 The Issue at Stake: Should Dogs Be Allowed to Vote?

Elliott: Dogs. Man’s best friend. We let these noble animals sleep in our homes, eat our food and perform simulated intercourse on our legs. They have contributed immeasurably to our arts and culture, whether by being photographed in human clothing, being painted playing cards or being filmed saving children in peril. And yet, dogs, no matter how well behaved they are, cannot vote in local or federal elections. This must be rectified.

I believe that any well-behaved dog should be able to vote, as well as hold office and manage campaigns. A well- trained dog should have no problem understanding the complex issues of politics today, just as they understand that they must keep off the sofa in the living room. You may ask how can we tell which dogs are well-behaved and which aren’t? There are the obvious signs, of course. If a dog is unkempt in appearance, smelly in odor, or bites you, then it is safe to say that he is poorly trained and must be escorted from the polling place so that he can be humanely murdered. In addition, all dogs attempting to vote will have to prove their behavior by performing a trained act, such as retrieving a poll worker’s slippers. This Poll trick will remove all doubt as to whether the dog can make his voice heard. Metaphorically, that is. All well-mannered dogs bark only when commanded to.

Brock: Let me start by saying that the topic of this debate insults my intelligence. Any able-minded person knows that the right to vote should not be extended to well-behaved dogs. It should be extended to all dogs. By only granting voting rights to well-behaved dogs, are we not just practicing dog segregation? What if I were to suggest that only well-behaved black people should be allowed to vote? You’d call me a racist. and you know what? You’d be right. I am a proponent of universal dog suffrage. One dog, one vote. No exceptions.

Elliott’s Rebuttal to Brock’s Nonsense: The risks are too great in letting all dogs vote. I estimate there are 400 million dogs in this country. 390 million of which are, by my standards, bad dogs. Yes, I have very high standards. Some might call me a dog snob. But then, I am a former Westminster Kennel club show judge.

The point is bad dogs would immediately run this country. Their likely first course of action would be deregulation of the Snausage industry. Treats would no longer go to the most deserving dogs, but merely to those who begged the loudest. Ronald Reagan warned us about welfare queens, but what about welfare bitches? Bottom line: I hope you like rabies. Because if all dogs can vote, our next president will have them.

Brock’s Rejoinder to Elliott’s Claptrap Bunkum: We have nothing to fear about electing a chief executive with rabies. One of our greatest presidents, Franklin Delano Roosevelt, had polio and what is that, if not rabies for people? Also, Grover Cleveland had mange, yet that didn’t keep him from serving two non-consecutive terms and snagging a hot, 21-year old First Lady.

Finally, Elliott, you have no one but yourself to blame as to why you are a FORMER Westminster judge. The handbook states that decisions are to be made on the basis of a dog’s musculature, gait, color/sheen of its coat and temperament, not on how good it looks in costume. Just because a bloodhound has a deerstalker cap tied to its head doesn’t mean it deserves a trophy.

Conclusion
In which Elliott and Brock make token concessions to the other’s argument, while remaining fundamentally unchanged about the validity of their own rhetoric.

Elliott: Brock, I admire your idealism and your uncompromising nature. However, I refuse to believe that any dog is well-behaved enough to sniff the ass of voting rights, unless that dog is wearing a top hat and monocle. No matter what those douches at Westminster think.

Brock: Elliott, although the chances of it happening are very slim, I admit that it would be a national tragedy if the president died of rabies. That said, I feel the building association should have to pay to clean the carpets MLK, Jr. soils, not me. Why am I paying these outrageous common charges if not to have stuff like this taken care of?