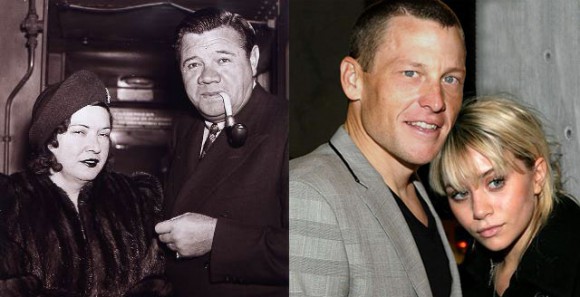 Ruth: This is what a professional athlete’s body used to look like.

Lance: When I was competing, I probably trained for hours and hours each day and watched everything I ate.

Ruth: I also watched everything I ate. Watched myself eat it!

Ruth: Also watched everything I smoked and drank and fucked.

Ruth: Not many people can claim to be one of the best athletes in history and then have John Goodman play them in a movie.

Lance: I would almost definitely be played by Matthew McConaughey in a movie.

Ruth: And you said you were famous for riding a bike, right?

Ruth: I never did anything that heroic. Although once I told a kid in a hospital that I was going to hit a home run and then I hit like three home runs. It saved his life.

Lance: You would think medicine would have saved him.

Ruth: You’d think, but all it took were the home runs.

Ruth: People think of me as being a Yankee, but first I was on the Red Sox.

Lance: And then they traded you and got cursed.

Ruth: Yes, the Red Sox traded me to the Yankees and now people from Boston hate all New Yorkers.

Lance: Especially the Jewish ones.

Ruth: Yes, especially the Jewish ones.

[Ruth takes a bite of a Baby Ruth and offers some to Lance.]

Ruth: Would you like a bite of this candy bar? It was most likely named after me.

Lance: I feel like it wasn’t named after you, but was actually named after someone’s daughter or granddaughter whose name was Ruth.

Ruth: That sounds right, but neither of us can remember that story exactly, so let’s just say it’s named after me.

Lance: The Payday bar is definitely named after the day of the week when one receives their paycheck.

Ruth: And Lou Gehrig’s disease is named after Lou Gehrig.

Lance: You probably played with him.

Ruth: Probably. I know Mickey Mantle and Roger Maris were later than me. Joe DiMaggio could have played with me, too, but maybe he wasn’t born until after I died. There’s no way to know these things.