It’s a new year, and I’m just now coming down off of a ten-day sparkling-wine-bender (it was not, mind you, a Champagne bender — the stuff I got was made in Dayton. It was nasty). So anyway, let’s pick some things.

1) The Settlers of Catan 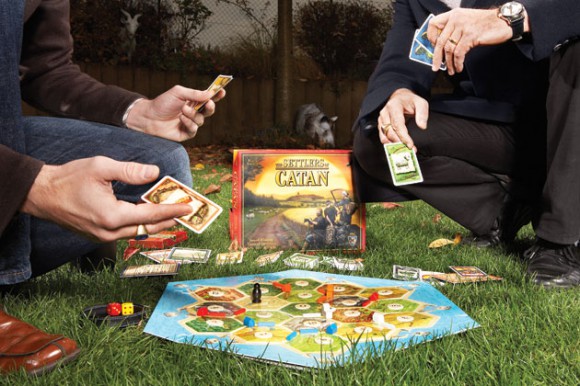 Despite what this photo may suggest, it is impossible to play The Settlers of Catan on an uneven surface.

In addition to getting blitzed on Southwest Ohio’s finest sparkling wine, I spent much of the past two weeks playing the brilliant board game The Settlers of Catan (SoC) with basically anyone and everyone I could find. SoC is what you would get if Risk and Sim City courted, were married and had a child — but then that child (after a messy divorce) was raised by Grandma Pit (the popular commodities/yelling game) and sent to a magnet school that focused on awesomeness. SoC was invented in 1995 by potential Die Hard villain/potato enthusiast Klaus Teuber. As the legend goes, Klaus was sitting around one day, peeling potatoes, watching Die Hard 2, and playing with a stack of cardboard hexagons, tiny wooden houses, dice, and a deck of cards on which was printed the same patterns shown on the hexagons. While walking to the kitchen to get a cup of warm buttermilk, he tripped, spilling these items onto a large kitchen table and just like that Settlers of Catan was born. Sixteen years later it would be given to me for my birthday and then played over and over and over again until all of my friends have been driven away by my frequent and shrill calls of “would anyone like to trade for some wheat?” Good times, indeed!

2) Weight instead of volume. 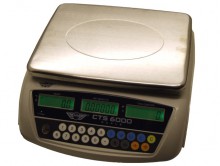 I’m not in the prognostication business, but if I were I’d be telling each and every one of you sonsofbitches to put every cent you own into weight, not volume. Volume is over. Six, seven months from now, you’ll have to look pretty hard to find some poor sap still using volume. You say your cake needs a cup of sugar? “What’s a cup?” the people will ask. “Oh you mean this thing?” as they use the end of their pinky fingernail to dangle a set of Betty Crocker measuring cups in your dumb face. Women and children will recoil in horror at those still trying to measure out baking soda in tablespoons. Instead, cutting-edge digital scales will be used. Ounces, pounds, that’s what the kids will want. I’m as sure about this as I’ve been about anything in my life. 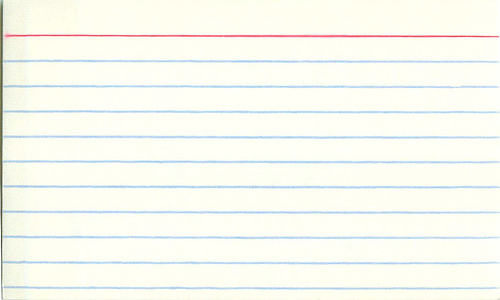 Talk about your wonder products! Stop what you’re doing and head over to your local office supply retailer. Go up to one of those kids in the matching Polos and ask them to show you the index cards. They should take you to a section of the store where index cards are readily available (but you never know with these kids, so double-check). Look them over. I know the choices are intense, but you can do it. Buy a few packs. They are inexpensive. Here, I’ll even wait.

[Rick sits on a scale and begins playing Settlers of Catan. The scale says Rick weighs 2240 ounces. This seems off to him so he throws the scale out the window, rejecting his entire premise from Pick #2.]

Oh, you’re back! So now you have these index cards. You can write stuff on them and then put them in your pocket for later. You can put a stack together with a binder clip on the side and made a little flip-book where a stick figure jumps a ravine. Wait a minute. It looks like you’re using 4×6 index cards. I’m sorry that won’t work at all. Please exchange them for the 3×5 cards. Didn’t your read the heading? It’s okay. No worries. I’ll be right here when you get back.

[Rick hears a knock at the door. It’s Officer McGurlicy. “Hello there, Officer,” says Rick. “Is this yours?” Officer McGurlicy holds up a CTS6000 digital scale sealed inside a gallon Ziploc bag. “Um. No. No, I’ve never seen that before,” says Rick. “Really? Because this piece of tape on the back says property of Rick Pecoraro.” “Is that a gallon-sized bag?” says Rick. “You know, uh, volume is really going out of fashion.” “Sir, three minutes ago this scale was hurled out of window and smashed through the rear windshield of a parked Mazda Protege. All witnesses say it was thrown from this very apartment. I think we need to take a trip downtown.”]