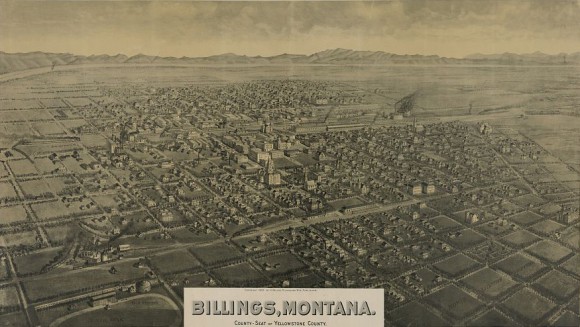 Hello, Billings here. Whenever I travel around this wonderful nation of ours, people come up and tell me how much they love Montana, the skiing, the fly-fishing, the antelope-hunting, A River Runs Through It, the huckleberry pie, that sort of thing… I’ll always nod and say that’s part of what makes Montana great, but what do you know about Billings? Nine times out of ten, their answer will be wrong. So I’d like to take this opportunity, if you’ll indulge me, to clear up some common misconceptions about me, Billings, Montana.

1. “I love Billings. It’s one of the most underrated cities in the Midwest.”
Thanks for the kind words, neighbor, but I have to stop you right there. I am not in the Midwest. I don’t mind the Rocky Mountain region, the Old West, the Great Plains, maybe even the Northwest on a good day, if you drop the “Pacific”, but my preference is for Big Sky Country. Just so long as you know, Billings isn’t in the Midwest. That’s for flatlanders and corn farmers.

2. “You’re known as the Magic City, I assume this is because you are the hometown of a vibrant community of illusionists.”
While that is definitely the case for fellow Magic Cities like Bogalusa, Louisiana and Millinocket, Maine, I actually got the handle because of my 1,000-watt smile, fast break- running skills, game-winning junior-junior-skyhooks, and inner-city Starbucks franchises. Although contrary to what you’ve heard, I do not have HIV.

3. “I remember looking out of my Amtrak sleeper car at the Yellowstone River and up to the Rims as the sun came up and we pulled into the station. One of the most gorgeous sights I’ve ever seen. Beautiful city, you’ve got there.”
You’re making me blush… But more than that, you’re also making me red-faced with anger because the people train hasn’t come through my parts in over thirty years. Closest stop is Malta, more than 200 miles away, so I have no choice to assume you were freight-hopping. A boxcar is not a sleeper car, missy. Riding the rails is illegal, dangerous, and it brings a lot of unwanted transients and their rotgut wine to this peaceful burgh.

4. “I love that movie y’all had there with that fat guy and the car driving… I think the Jerk was in it… Candy, that’s it, John Candy. What ever happened to that guy, he sure is funny… Had rides with some hogs in a truck to get back to Chicago for Thanksgiving…Must be near you, right?”
The movie you’re thinking of is Planes, Trains and Automobiles, and I’m no film historian, but I believe it was filmed primarily in the Midwest. As I mentioned earlier, I am most definitely not in the Midwest. Chicago is 1,074 miles away, so I have nothing to do with that holiday classic. Don’t sleep on my oeuvre, though. If you like funny, check out the 1993 sleeper Josh and S.A.M. It’s got Joan Allen, Chris Penn, a young Jake Gyllenhall, and preteens getting into hijinks in a stolen Pontiac Grand Prix cruising through Big Sky Country. You’ll never think of Strategically Altered Mutants in the same way again!

5. “Ah, Billings, Montana, I recently enjoyed a pornography you starred in. I didn’t even know Billings had black people!”
Sorry, but I believe you’re thinking of Montana Fishburne, or as she’s known to her longtime fans, Chippy D. You know, Larry’s kid. And of course I have black people. We’re not Cody, Wyoming for furious’s sake.

6. “That town’s nothing but a buncha no-workin’ hoboes swilling Thunderbird by the railroad tracks.”
Bite your tongue. You best be casting your aspersions on some other town, maybe Great Falls. I bet you wouldn’t sling your verbal arrows if you knew that I’m the corporate headquarters of KOA. That’s right, the Kampgrounds of America. Considering your guttersnipe of a mouth, I’ll assume your Mom and Dad never even took you on an overnighter in a Kamping Kabin. Probably never tasted a S’more. Philistine.

7. “General George Armstrong Custer is a fag.”
Is that so? I think his wife Elizabeth Clift Bacon, and his other unofficial Cheyenne indian bride Monaseetah, would disagree. Rumor has it the man was sterile from gonorrhea he picked up at West Point. But spare me your lack of historical pedigree. Go spread your filth in Hardin, it’s their jurisdiction and that’s an hour’s drive from here, smart guy.

8. “Only thing ever come outta Billings is steers and queers.”
Have another, rummy. Only a sot such as yourself would miss all I have to offer. ZooMontana is raising three cubs after their mother mauled three campers last summer and had to be euthanized, Avenue Q is coming to the Alberta Bair Theater next March, the Outlaws are the reigning Indoor Football League United Bowl champions, I was featured in The Amazing Race, and Walkers Grill makes a hell of a Spinach-Grilled Artichoke Manicotti. And for your information, boozebag, this town has both a thriving cattle industry and a live-and-let-live attitude to our gay and lesbian community, just ask the patrons of the Outfield Sports Bar!

9. “you smell like ass.”
Wrong, sir. The aroma that’s aroused your olfactory system is the sweet refining of sugar beets at the Western Sugar Cooperative. It may not be a bouquet of roses, but to me it smells like good old-fashioned American commerce. You want the stench of failure? Why don’t you mosey on down Interstate 90 and get a whiff of Laurel? I believe you’re wearing the same scent.

10. “So, uh, when’s the best time to visit Billings? I always heard early fall is beautiful in the Midwest—“
That tears it! You can all just rope yourself into a big pigpile and hogpork yourselves until you squeal in pain for all I care. You don’t deserve me. You don’t deserve Billings, Montana, home of Stroopwafels, the greatest caramel cookie waffles on God’s green fucking earth. Magic City out.