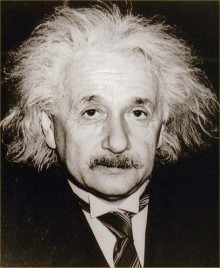 [Graham Bell turns around revealing that he’s on the phone, and holds up a finger as to say, “one moment.”]

Graham Bell: [Into phone] Right, and then she said what? She didn’t….no way….

Graham Bell: [Into phone] Right…Ed…Eddie…Edison, I gotta go. Freakin’ Einstein here wants to talk to me about something. [Pause, laughs] Right…Yeah, a fucking MC square. [Pause] Sounds awesome. Give me a ring. Bye.

[Graham Bell hangs up. Einstein is pretending to be busy, writing E=MC squared on the chalk board over and over.]

Graham Bell: What was so important that you couldn’t wait?

Einstein: Vat vas that about? 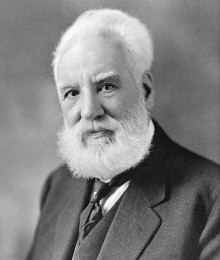 Einstein: [Under his breath] Vill it change the vay people think about entire vorld?

Graham Bell: Huh? Couldn’t hear you over the phonograph…yeah, that’s right the motherfucking phonograph. I invented that shit!

Einstein: That wasn’t you, that vas Edison.

Graham Bell: Are you sure?

Einstein: As sure as I am that energy equals mass times…C…squared.

Graham Bell: What did I do then? Just the telephone? I think I might have invented a metal detector, too. Does that sound right?

Graham Bell: How crazy is my beard?

Einstein: How about my fucking hair?