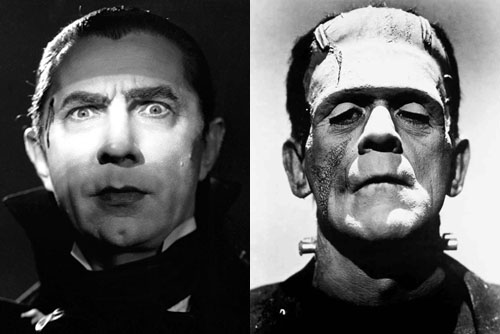 Frank: No, I don’t think you should. I think I’m not him. I’m the monster he created.

Drac: So your name’s not Frankenstein?

Frank: And you’re a vampire?

Drac: Yes, I think I’m just a regular vampire, but like the most famous one.

Frank: So you must be psyched about all this Twilight stuff, right?

[Dracula rolls his eyes, but does it in a weird way, because he’s a vampire and his social skills aren’t very natural.]

Drac: Why do you have bolts in your neck?

Drac: What are you exactly? Like pieces of other people all put together?

Frank: I don’t know. I know I have trouble walking.

Drac: Yeah, I remember from the Mel Brooks movie.

Frank: I was actually created by some woman named Mary Shelley.

Frank: She must have been one messed up broad.

Drac: I wouldn’t want to be Mr. Shelley.

Frank: You said it, Dracula!

[Dracula knows that this is actually not true. He was created by an Irish novelist named Bram Stoker, but Dracula just wanted to fit in with Frankenstein, because it’s hard for him to make friends, so he lied and said he too was created by Mary Shelley. The two then had a good laugh, but it didn’t sound pleasant. It actually sounded scary. Because they’re monsters.]