JON: (waking up from a raucous slumber) Oh… my head. I dreamed I was in a room full of bones. Where am I? Oh, NO! A room full of… what is all this? BONES?? Davies! Davies, wake up!

DAVIES: Huh? (looks all tired but then suddenly wises up) A ROOM FULL OF BONES?! OH NO

DAVIES: BARGE? Who are you?!

BARGE: Barge is the best of the best – a kickass renegade soldier of honor who just got mixed up in the wrong crowd – you two losers and one hive of nasty bones.

DAVIES: Wait… there’s a door over there. Let’s just leave.

BARGE: No such luck, you unattractive dickface. This door won’t budge, it’s locked up tighter than Sargeant Facepuncher’s fist.

JON: What’s that geologographic map you have up on the wall there?

BARGE: This… is my battle plan! Every general must know his enemies and my enemies are BONES! If we want to get out of here alive we’ll have to (gets clubbed over the head with a bone) AH! Who threw that rogue bone???

(Jon and Davies look at each other, and then look at Barge and shrug)

BARGE: This is bad. I suspect one of these bones is the GrandMaster bone. I also suspect that some of these bones are counterfiets planted here by a highly organized alien race. If we can find this “Superbone” and de-program it, computerally, we just might be able to get out of here alive, and then maybe go rob a bank or something afterwards.

JON: We should definitely get a burger also after we get out of here.

BARGE: (points at JON’s face without looking at him and speaks forcefully) A burger would be good.

DAVIES: Yeah burgers are – (interrupted and shouted over by BARGE)

BARGE: DAVIES WATCH OUT A BONE IS CRAWLING NEARER TO THY LEG

DAVIES: Damn! Bone nearly got me! (smashes that filthy bone to dust)

BARGE: You fell for the oldest trick in the book. There was no bone, that was your wallet you just smashed.

DAVIES: DAMMNNNNNNN YOU, GOD OF BONES!

JON: Guys, wait… I found one bone… it’s a middle finger bone (all three gasp even JON, that’s how intense that discovery was)

BARGE: Don’t look at it! It will totally get the upper hand if you do. Just, carefully reprogram its cyberglands and then sarge-up the computercode reigon with this data chip. (holds up a glowing data chip)

BARGE: NO! YOU DIDNT DO IT RIGHT OR SOMETHING THE BONES ARE GLOWING REEDDDDDDD!!!

DAVIES: There was just a bunch of bones in the way, see? (opens the door and a sunlight beam comes in, shining on them and healing their souls. Barge and Davies begin to leave the room and they turn back and look at JON.)

DAVIES: Are you coming, Jon? We’re gonna get burgers and….

(Just then, the camera slowly pans back to Jon, and his head has been transformed into a giant dog-bone shaped bone. On the side of the bone it says the following message:

“CHILDREN AT HOME, BE SCARED OF BONES. BONES ARE COMING TO GET YOU IN YOUR SLEEP, THEY ARE ALWAYS COMING, CRAWLING SLOWLY TOWARDS YOUR BED. WHEN YOU TURN THE LIGHT ON THEY QUICKLY HIDE. BONES ARE EVIL. IF YOU ASK YOUR DAD FOR HELP HE WILL BE MURDERED BY A BONE.”

BARGE and Davies both say “NOOOOOOOOOOOOOOOOOOO” as a trapdoor opens beneath them and they fall down to their dooms. The camera zooms up to the sky, eventually reaching the ALIEN MOTHERSHIP where FROGMAN and APPRENTICE are discussing their plan. They are aliens. Just then there should be an advertisement for ROOM FULL OF BONES 2: THE TALKING ALIENS PART) 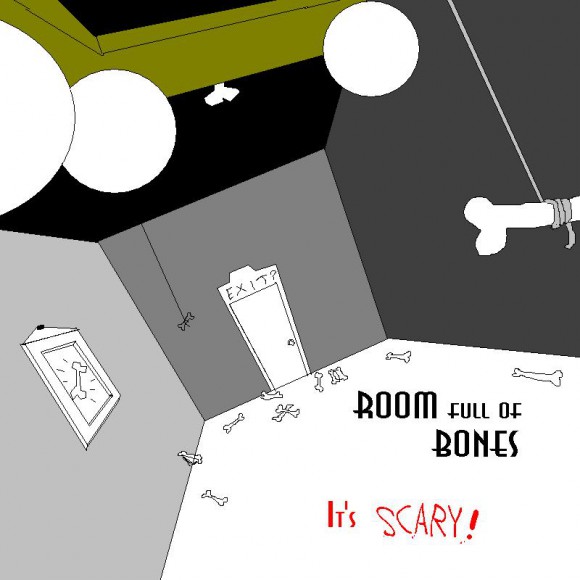