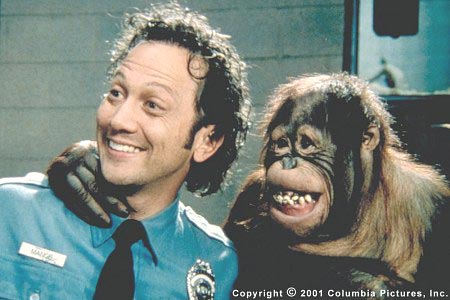 [Rob Schneider is outside of a club, waiting for Adam Sandler to show up so he can get past the bouncer. Frank Langella is walking out with an African-American prostitute on each arm.]

Langella: I am the actor Frank Langella. Frost/Nixon. Eddie, where I play the cowboy owner of the Whoopi Goldberg-coached NY Knicks…

Schneider: Of course. And then as Sean Connery you were James Bond, and in The Rock, where you said “Welcome to the Rock.”

Langella: That was Sean Connery. Not me.

Schneider: Isn’t Frank Langella just a character Sean Connery plays? Like when he plays an American.

Scheneider: I’m sorry, I didn’t mean to offend you. How can I make it up to you? Should I have Adam put you in a movie? Sometimes he even gives me my own movie. I could talk to him.

[He and the prostitutes walk away into the night. Schneider continues to wait for either Adam Sandler or Chris Rock to arrive.]

Schneider: [To bouncer] What about David Spade? Can I go inside if he comes and says I can?

[The bouncer pretends he did not hear.]