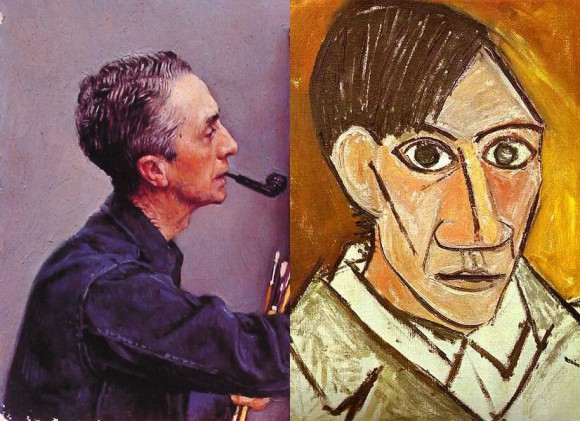 Pablo: I was alive a lot more recently than you would think.

Pablo: Yeah, I think I was too.

Rock: Are you sure? It seems like you should be a lot older than that. Like maybe you painted at the same time as Van Gogh and Da Vinci.

Pablo: Those two people did not paint at the same time.

Rock: Are you sure?

Pablo: No, not really.

Rock: Some of what you painted was weird. Remember that whole blue period thing? And then the ones where all the faces are fucked up.

Pablo: Yes, you paint things that are lot more normal, for instance the kid at the end of the diving board or the one with the umpires determining whether they should call a baseball game due to rain. Such important paintings.

Rock: Are you being sarcastic?

Pablo: No, not at all. The kid of the end of the diving board was a groundbreaking work of art. And also very similar to the cover of the Shel Silverstein book Where The Sidewalk Ends.

Rock: You know what man, my paintings made a lot of people happy.

Pablo: I think that’s great. And really who cares if they’re of the same quality as your average college art student.

Rock: Guernica is a thing you did that is impressive.

Pablo: It was big.

Rock: It had to do with the Spanish Civil War?

Rock: This is because you are Spanish?

Pablo: Yes, this is likely because I am Spanish.