A Conversation Between Frank Capra and Franklin Delano Roosevelt 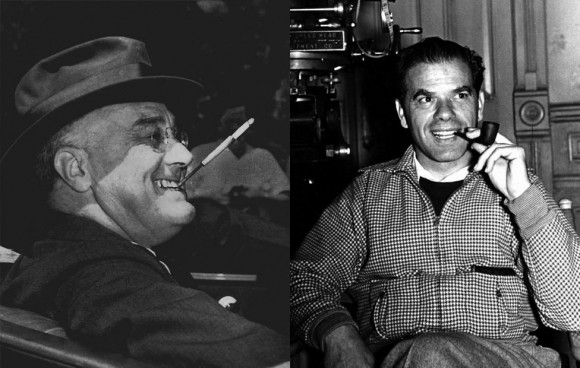 Capra: Please, don’t get up.

[FDR sits in a wheelchair and does not seem to think this joke is funny.]

Capra: I’m kidding. I know that you’re in a wheelchair because you have polio, but people used to not know this about you.

Capra: I was alive when you were the president and I know that you were elected to office four times.

FDR: I was popular because I got us out of the Depression.

Capra: Or in a way, World War II got us out of that, right? What with the job creation and everything?

[FDR mutters something under his breath that sounds like, “I’ll World War II you.”]

FDR: And you were popular because your movies made people feel good, right?

FDR: They play that one movie every year around Christmas because it’s such a happy family film, right?

Capra: That they do.

FDR: You know, except for the guy who yells at his family, goes out and gets drunk, and tries to kill himself.

[Capra mutters something under his breath that sounds like, “Every time a bell rings, I’ll kick your fucking ass.”]

Capra: Lots of people think you were a socialist, huh? You know, because of the New Deal and how it was pretty much socialism.

FDR: I just had to do what was necessary to get the country out of a depression.

Capra: Yeah, just had to socialize the country.

FDR: I guess I did have to use a bit of socialism. If only government were so easy that just any idiot could go to Washington and get things done by giving sappy dramatic speeches on the floor of Congress. But nobody would buy that, right? It would be too absurd.

[Capra mutters something under his breath that sounds like, “I’ll march some dimes all over your fucking face.”]

FDR: Anyway, I should be going.

Capra: Gotta go round up some Japanese-Americans and throw them in camps?

FDR: No, actually I have to go blow Jimmy Stewart as a thank you for giving me a career. Wait, no sorry, that’s you.

Capra: Oh, I almost forgot, tell Eleanor I said thanks for last night.