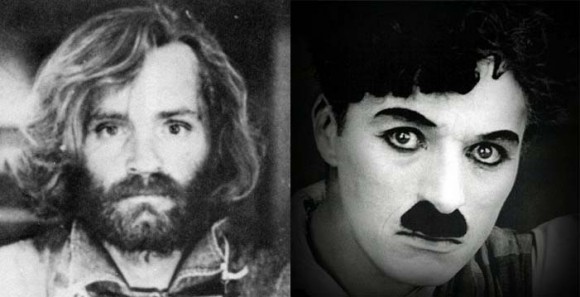 Chaplin: Thank you, but I actually had this look first. People probably say to Hitler, “Sweet Chaplin ‘stache.”

Manson: Yes, that’s likely how that goes down.

Manson: I’ve seen some of your movies. There is no talking, but words on the screen and piano music that sounds like it is being played by people dressed in red and white striped shirts and boater hats.

Chaplin: Did you enjoy my films?

Chaplin: Some say they’re the best comedies of all time.

Chaplin: It was a different time. You had to be there. It was edgy stuff then.

Manson: I know what you mean about being a victim of the times. I suffered from a little of that as well.

Manson: You know, the ’60s, man. With the music and free love and cults and stabbings and everything.

Chaplin: The cults and stabbings?

Manson: Everyone was doing it. It was a different time.

Chaplin: Doesn’t sound that funny of a gag.

Manson: Yeah, and you would know funny gags.

Manson: It was only President Ford, anyway. Not a big deal.

Manson: You know, between your Führer mustache and the swastika carved into my forehead, I bet a Jew wouldn’t be too comfortable in this room. Am I right?

Chaplin: Not a bad thing though, is it?

Manson: Not at all, my friend, not at all.

NOTE: For the purposes of this piece, the author takes a small liberty in assuming that Charlie Chaplin was hugely anti-Semitic. Probably true anyway though. Everyone was back then. Most still are.

The Kid, The Tramp, The Family
Written by: Matt Passet
Tweet