Beyond Headless – A Halloween Bestiary 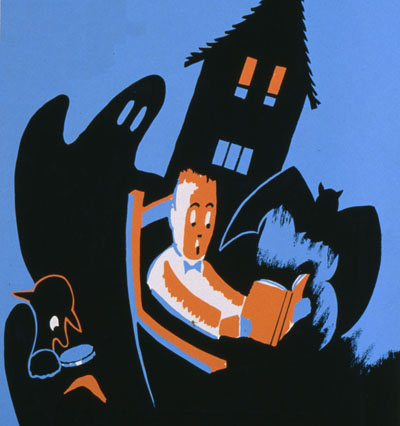 The Handless Houseboy
While having one hand can, under certain circumstances, be terrifying (see “Hook, The”), having NO hands is just inconvenient, especially when one is employed as a houseboy to do tasks such as cooking, cleaning, and light massage—all of which work best with a full set of appendages. Thus, the Handless Houseboy’s brand of terror is primarily psychological. It is the terror that comes from hiring a manservant out of pity, then realizing you’re stuck paying their salary for the next thirty years.

The Boneless Gondolier
Rumored to roam the canals of Venice, this gelatinous fellow is truly disgusting to behold. Fortunately, as long as you stay out of his boat, you’ll be safe, since his lack of skeleton makes it impossible to give chase, or to operate the oar.

The Fingernail-less Bartender
This gruesome specter loves to bedevil alcoholics by waiting for a patron to order a beer, then making grand show of being unable to pop open the can without a fingernail to gain leverage. This is why most paranormal experts recommend ordering drafts.

The Tasteless Movie Critic
This diabolical specimen was responsible for you going to see Life as We Know It starring Katherine Heigl and Josh Duhamel.

The Heartless Hooker
While Hollywood may have popularized the hooker with a heart of gold archetype, this sexy/deadly young pro feels nothing but distain for you. Of course, that’s pretty normal for hookers. The horror comes when you discover she’s also vagina-less, which is going to impede your plans for the evening. Thus, the Vagina-less Hooker would probably be more apt, but it lacks alliterative zing.

The Skinless Chicken Breast
This reanimated chicken breast is fabled to roam the north woods, slithering over people’s mouths while they sleep, leaving a trail of salmonella in its wake. However, legend has it that the true of heart can catch it, cook it and be rewarded with a high-protein, low-fat weekday meal.

The Philtral Dimple-less Blind Date
Stalking the pages of Match.com, this ghoul looks passably cute in photographs, but when you meet up for tapas, you feel there’s something vaguely creepy about her. Eventually you realize it’s that she lacks the little divot under her nose. Despite this, you decide to go on a second date, but she never calls you back. And after YOU were willing to overlook her weird nose thing. How DARE she?