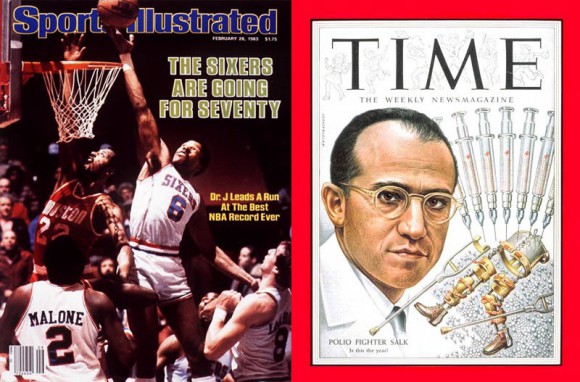 Dr. Salk: That dunk you once did where you sort of jumped from one side of the basket and then dunked it on the other side; that was pretty bad.

Dr. Salk: I am using the term “bad” the way Michael Jackson used it.

Dr. Salk: You played in something called the ABA.

Dr. J: Yes, it was like the NBA, but it only existed in the ’70s and everyone was on drugs.

Dr. Salk: Like polio, today nobody knows what the ABA is.

Dr. J: The iron lung is a thing that had to do with polio. I know this because of that scene in The Big Lebowski?

Dr. Salk: It says something good about America that more people know about The Big Lebowski than they do about polio or about me.

Dr. J: Another thing about polio that I know is that FDR had it, but nobody knew or talked about it because he always took pictures sitting down. Back then the media was not as invasive about the private lives of public figures.

Dr. Salk: Yes, that is how President Kennedy was able to fuck so many prostitutes without people talking about it.

Dr. Salk: Yes, it was a better time when polio was still around.