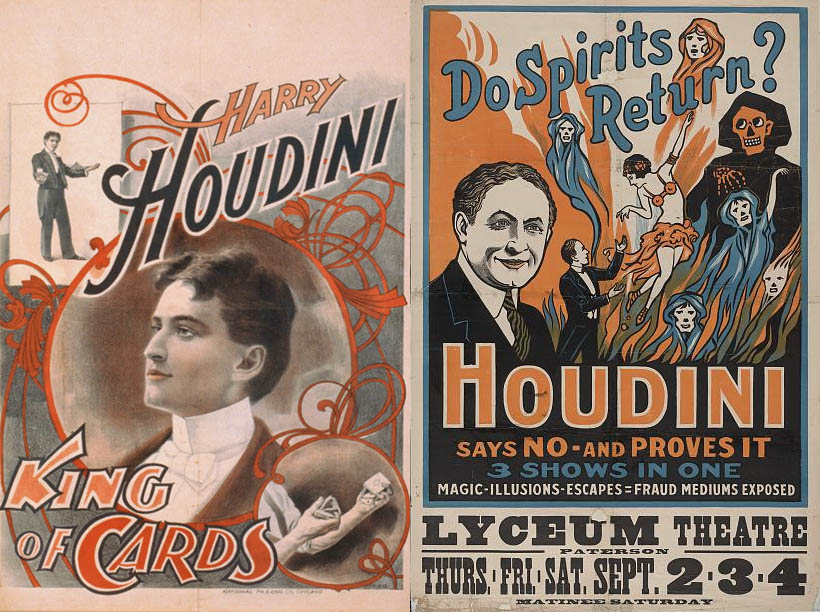 Oct. 9. 1883
I know what I’m going to be when I grow up, Diary! A magician. Today, grandpapa said he’d show me some magic; then he pulled a coin from my ear. The ability to dispense legal tender from my auditory canal should be a real plus in this hardscrabble tenement life of mine.

Oct. 16
After a week of self-inflicted earaches, I’ve learned the money thing was a “trick.” It’s almost enough to make me reconsider my decision, but I’ve already spent my ear coin on “magician” business cards, so I guess it’s too late to switch now.

Aug. 1, 1887
My magic skills have landed me my first job! I am to be a circus acrobat, “Ehrich, Prince of the Air.” Tonight I debut what I hope will become my signature trick—picking up pins with my eyelids. Wish me luck, Diary!

Aug 2
Severely scratched corneas. Squinting. Painful to write. Essential I get out of circus biz. Heard about new type of magician, who specializes in removing handcuffs. Seems easy enough. I shall become an escapist. Must go dip eyes in aloe.

Jan 15, 1888
Turns out I was thinking about cufflinks, not handcuffs. Handcuffs are actually quite difficult to remove. I have to stop making snap decisions. Research!

Sept. 2, 1891
I have saved enough money to purchase my first pair of handcuffs. Have been wearing them for the past week. V. confident I’ll crack them soon. Somewhat less confident my finger circulation will be restored.

Dec. 6
Procured new handcuffs. Feel I’ve learned a lot since last time. Still, will my new escape attempt be a success or a failure?

Dec. 10
Success! No, wait. Hard to write with these handcuffs on. I meant “failure.”

Dec. 12
My hacksaw budget is out of control. On the positive side, I have come up with one escape trick, whereby I ask someone to handcuff me, I catch the 5:06 trolley to the locksmith district, and return unshackled and triumphant. It remains unknown whether an audience will remain seated for a trick so long in duration. Perhaps if I serve refreshments?

May 2, 1893
Married my beloved Bess today. I still remember the day we met—she, an audience volunteer—me, the magician who handcuffed her to my wrist. Some say absence makes the heart grow fonder, but I’ll be dammed if several months of enforced proximity aren’t just as effective. I cherish how her constant cries of “Seriously, you can’t unlock this?” gave way to the sweetest endearments. I just hope our union will not be unlucky. The cuffs made it v. hard not to see her in her wedding dress pre-ceremony.

Nov. 9, 1898
Brainwave. I will use keys to open the locks. In situations where a key would not be considered sporting, I shall either (1.) use something called a “lock-pick,” or I shall (2.) still use a key, but not tell anyone about it. This is the breakthrough I’ve dreamed of!

Jan. 1, 1889
My new success demands a new name. In honor of the French magician Robert Houdin, I shall henceforth be known as Houdini! My manager says it sounds Italian, but he also called my given name, Ehrich Weiss, “too ethnic.” Beginning to suspect my manager is racist. “Houdini” is also a perfect name for my planned side-project—I intend to create a musical genre based not on melody, but the rhythmic busting of rhymes. I’ve already written one song, inspired by my sideshow days, on the topic of freaks, and their tendency to come out at night.

Apr. 23, 1915
Uneasy is the head that wears the crown. I worry constantly that I’m repeating myself. Is my Milk Can escape too similar to my “Escape From an Oversized Cannister of Barley?” And is there dignity in a life of escaping from giant foodstuff containers? Despondent. I argued with Bess today. She never tires of observing that my greatest escape comes when it’s time to clean the spittoons. I asked her why a family that abstains from tobacco needs so many spittoons, but she was unmoved. One of her barbs struck me to the core—am I an Escape Artist, or merely an escape craftsman? Much to consider.

Oct. 30, 1926
Devised new trick, whereby I am repeatedly punched in the stomach, with a force that would kill most mortal men. This is the one they’ll remember me for! (Note: essential I remember metal abdomen plate.)