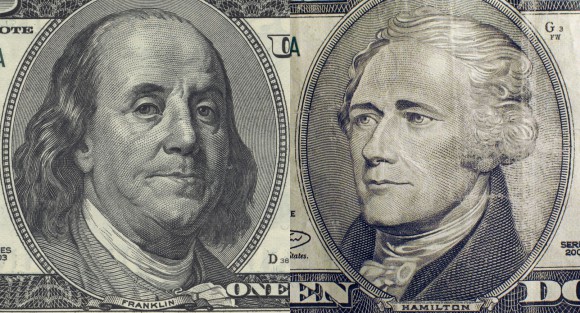 Frank: I was not president of the United States.

Frank: People think we were.

Ham: Because we are on money. People are not smart.

Ham: Are you asking me?

Frank: I think I did. To the best of my knowledge, I tied a key to a kite and then flew the kite in a lightning storm, discovering that the bright, electrified bolt in the sky is something that can hurt you.

Ham: Also bifocals you may have invented.

Frank: I may have.

Ham: I was shot by Aaron Burr in a duel. In New Jersey, of all places.

Frank: What did Burr have against you?

Ham: Not sure. You’d have to ask that guy from the Got Milk commercial.

Frank: With all of the peanut butter in his mouth?

Frank: No, seriously, the ten’s a good bill. At least it ain’t the one.

Ham: But it’s also not the hundred, right? Is that where you’re going with this?

Frank: Come to think of it, it’s definitely not the hundred.