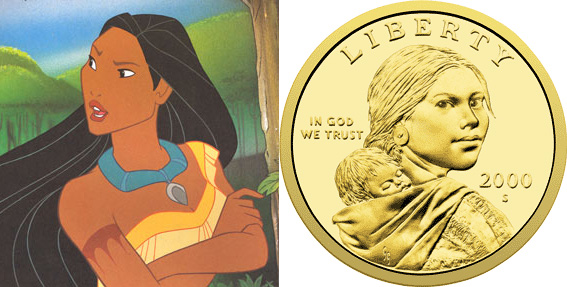 Sock: Let’s establish right off the bat that we are not the same person. I am like literally 95% sure of that.

Poke: As sure as I am that I am not just a character that was created for a Disney film.

Sock: Jasmine, Ariel, Cinderella: these people are different from you.

Poke: Absolutely, the biggest difference is that they are make-believe and I am a real person.

Sock: John Smith was someone that you did something with.

Poke: He was maybe my boyfriend or husband. Or maybe that part was made up by Disney. John Smith does sound a lot like a name Disney would make up, but back when I was alive people probably really had names like that.

Sock: I had something to do with Lewis and Clark, which are two people’s last names and not their first names.

Poke: You are on a golden dollar for some reason.

Sock: Yes, I am on a golden dollar that you get as change at Metrocard machines, but nobody actually uses as real money. They just get one of these coins and say, “What the fuck am I supposed to do with this?” And then they lose it.

Poke: On the gold coin, there is a baby strapped to your back.

Sock: That is most likely my baby. I’m not sure, but it would be weird if they put me on a gold coin with someone else’s baby on my back.

Poke: Let’s assume a white man got you pregnant.

Sock: This is safe to assume. White people are terrible and treat Native Americans like us terribly. Chances are that either Lewis or Clark put a baby in me, and then I put that baby on my back.

Poke: Mulan is a real person, too?

Sock: There is no way to know.